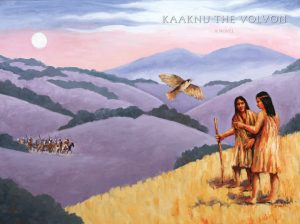 An awkward, amateurish attempt to tell an important story. Kaaknu the Volvon tribal chieftan was a real person. Recorded history shows that he attained prominent stature during his lifetime, which started in 1770 in a benign 10,000 year-old Native American cultural environment around Mount Diablo, east of the San Francisco Bay. It is hard not to appreciate the fantastic cultural stability that his people managed to sustain through hundreds of generations.

The Lost City in the East Bay Hills by Robert Bardell

A Time of Little Choice
The Disintegration of Tribal Culture in the San Francisco Bay Area 1769-1810
by Randall Milliken. Ballena Press. Menlo Park

The Destruction of California Indians
edited by Robert F. Heizer. University of Nebraska Press
Handbook of the Indians of California, by Alfred J. Kroeber. Smithsonian Institution 1925