Google Linda Yamane Paintings to view some of her art.

Her text below probably also reflects the life of the Volvon Tribe for many thousands of years and whose tribal territory around Mount Diablo is still more or less intact.

The Association of Ramaytush Ohlone recently began re-enlivening a piece of land in San Gregorio on the Peninsula in collaboration with the Peninsula Open Space Trust. 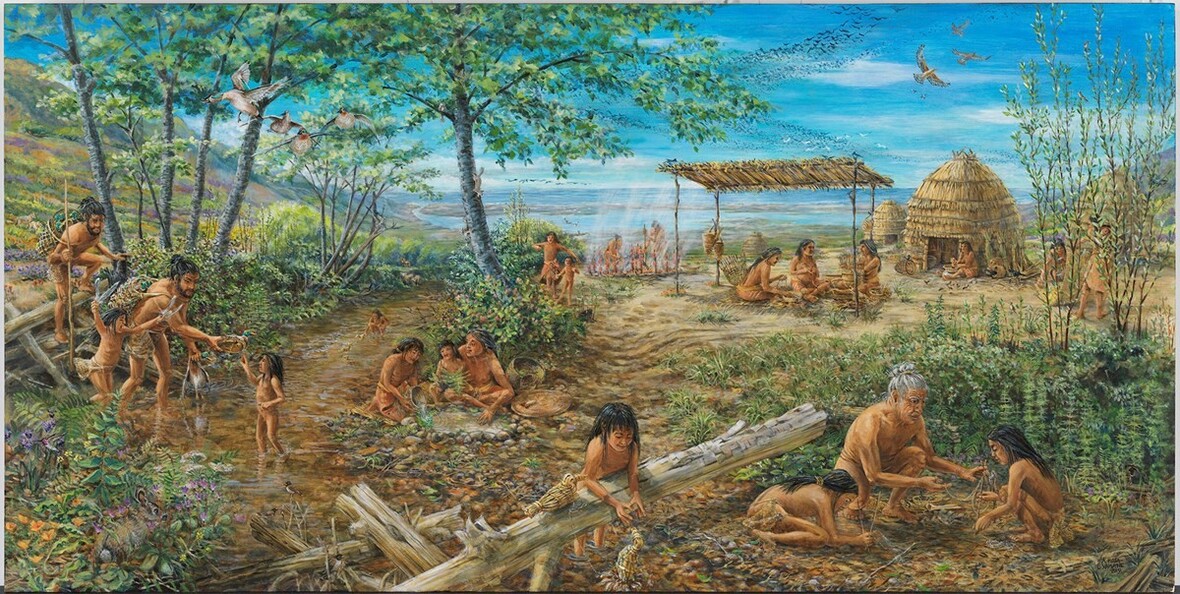 Like their other Ohlone counterparts, the Ramaytush speaking people of the San Francisco Peninsula lived comfortably on the land in a network of small villages.

Though speaking a common language, they were organized into several tribal units, each under the leadership of its own captain and living within its own territorial boundaries. These groups typically varied in size from fifty to five hundred people, living among three to five permanent villages and several seasonal camps. The local Aramai people of nearby Pruristac and Timigtac villages numbered as few as fifty or sixty people, and seem to have been organized into two smaller independent bands, rather than the typical multi-village tribe.

Ohlone life was centered on the natural world, family, and community. From childhood they began learning the skills they would use throughout life. Everyone had an array of abilities, but some were recognized for their special talents. One might be an exceptional hunter or fisherman, respected for keeping the village well supplied. Another might make the best bows, arrows, fish spears, rabbit nets, or shell beads. Perhaps they were an exceptional singer or regalia maker. Some women were renowned basket makers, sought after for elaborate ceremonial baskets, or baby cradles. Another could be famous for her beautiful feathered belts or ear ornaments.

From land and sea, stream and sky, the Ramaytush enjoyed a vast variety of nutritious foods. While the men hunted and fished, women focused on gathering plants used for food, medicines, and basketry. Menus included fish, seaweeds, marine mammals, waterfowl and other birds, as well as land mammals both large and small. Deer, elk, salmon and rabbits were among their favorites. Abalone, mussels, clams, and other shellfish were gathered from the seashore, while meadows and woodlands supplied fresh greens, wild blackberries and strawberries, nutritious bulbs and tubers, and a variety of protein-rich nuts and seeds.

Food was plentiful and the people were competent, but an experienced and respected leader was important for the organization, safety and well being of the group. The headman advised on the proper times to gather and store important plant foods or relocate to seasonal gathering sites. He also had the authority to resolve conflicts, whether within the tribe itself or with neighboring groups. He alone might have more than one wife, due to the heavy responsibility of providing foods, regalia, gifts, payments and other necessities at ceremonial events and inter-tribal gatherings. He and his family had special social status, but that status came with great responsibility and a serious commitment of service to their community.

The Ohlone world of the past was also rich in supernatural meaning and ritual, with shamans and healers, shape shifters, and others who specialized in the mystical matters of their everyday world.